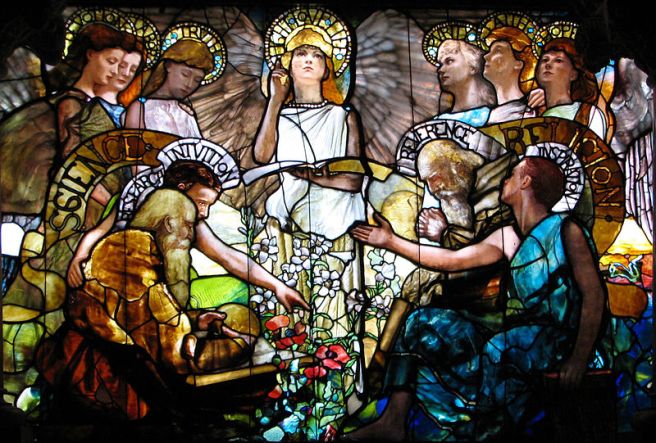 Some of the greatest epistemological battles are currently being waged between scientists, philosophers, theologians, and – due to the growing accessibility of networked communication – every individual with an Ethernet cable. The advancement of science and the pervasiveness of post-modernism has devastated our faith in subjective experience, religious belief, and personal opinion. There is greater demand now for evidence and validation through experimentation, peer-review, accreditation, and unbiased third-party evaluations than ever before.

Of course, there is a good reason for this. For all of humanity’s history the powerful and advantaged have preyed on the ignorance of the weak and disadvantaged. The very institutions that were supposed to protect and provide for the masses instead plucked the feathers from their bodies until they became cold and vulnerable. The laypeople stretched out their hands in hunger and desperation, and for this they were dismissed as wretched and sinful. They were forced to beseech a wrathful God for mercy and forgiveness, but due to their ignorance and unworthiness, they would have to do so through hired intermediaries.

As laypeople grew smarter and gained their independence, the more charismatic and eloquent among them carried on the predatorial traditions. We now refer to them as quacks, cons, hoaxers, imposters, cheats, swindlers, snake oil salesmen, and charlatans. Eventually, laypeople became smart enough to question grandiose claims, but now we have another problem: Instead of a world full of educated people independently investigating truth with a humble posture of learning, we’ve become a society of laypeople seeking the opinions of charismatic and eloquent hyper-skeptics. Since we are still appealing to authorities, nothing has really changed – the pulpit remains.

As a grad student studying experimental psychology, I am immersed in the epistemological debates of science. Unfortunately, however, these conversations aren’t happening amongst the masses in academia, only a few are engaged. Many of the students and professors with whom I come into contact are neither concerned with the BIG questions or have assumed the more popular theories as established truths. Worse yet are those who have departed from rational thinking altogether by latching on to one end of a polarized debate without considering the continuum of thought that is intrinsic to almost every issue. Stephen Hawking puts it best when he says, “The greatest enemy of knowledge is not ignorance, it is the illusion of knowledge.”

All this to say that I’m feeling slightly marginalized. Why? Well I believe in God, I subscribe to a religion, but I also consider myself a critical thinker and a scientist. This is, in the eyes of many educated people, a paradox. I know they consider me delusional: A textbook case of cognitive dissonance. My peers will probably ridicule my scholarly explorations by attacking my beliefs, “he believes in invisible people, ha! Let us laugh at him, mock him for his foolish irrationality.”

At the same time, I find myself siding with the skeptics and atheistic empiricists on almost every issue. For instance, I believe we should do away with dogma, ritual, and superstition. I don’t believe that there’s any individual who holds divine authority over any other individual. I don’t personally believe in the existence of miracles, magic, or inexplicable phenomena. I believe everything in our physical reality can be explained. I believe that science is the best methodology for understanding our observable universe. I believe that religion has been the source of much suffering and destruction for most of humanity’s history. I find most conceptions of the afterlife, God, the soul, spirit, heaven, hell, and angels to be complete and utter bunk and I find the people that believe in these fantasies to be very disappointing.

What will surprise most of my academic peers, however, is that I learned to be a critical thinker from my Faith, not from my schooling. Academia confirmed my critical beliefs, which were originally developed through my study of the Bahá’í Writings. In fact, I found (and still find) it to be very difficult to sit through classes and seminars at the university where lecturers encouraged us to use critical strategies to denounce the “irrational religion monster,” while it was religion that taught me critical thinking in the first place!

God has endowed man with intelligence and reason whereby he is required to determine the verity of questions and propositions. If religious beliefs and opinions are found contrary to the standards of science, they are mere superstitions and imaginations; for the antithesis of knowledge is ignorance, and the child of ignorance is superstition. Unquestionably there must be agreement between true religion and science. If a question be found contrary to reason, faith and belief in it are impossible, and there is no outcome but wavering and vacillation. (‘Abdu’l-Bahà, Promulgation of Universal Peace, p. 176-182).

And this is why I’m troubled. I’m afraid of people thinking that because I hold these beliefs, I must be irrational; that I’ve chosen to subscribe to a thing before thinking it through; that, somehow, I’ve chosen to apply my empirical training to all things, but my religion. Well this is very distressing, and not because it’s true and I’m having a hard time accepting it, but because it’s false and I feel the urge to explain myself.

Yes, it is true, we can explain EVERYTHING in this universe through the scientific method, but these explanations are based on theories, assumptions, and interpretations of data that simply describe physical reality – a reality that can change even in response to our observations of it. We don’t know anything for certain in science; we only have probabilities and improbabilities. I learned to live with that type of uncertainty through my study of religion years before university. It was my faith that taught me to investigate truth in a humble mode of learning; science simply gave me the methodology.

I’m not that smart. I never studied at a prestigious school, I’m terrible at math, and I have little training in philosophy beyond the few required readings for some first year courses. However, I’ve never stopped questioning my beliefs or analyzing my assumptions. I have, and am still, working on models that reconcile the artificial rift that exists between current philosophies of science and religion.

So over the next few blog posts, I’m going to explore some of my ideas and theories with the hope that some of you will stop thinking that I’m irrational. Actually, you’ll find that I’m really REALLY rational, hyper-rational even. What’s more important, however, is that you understand the Bahá’í framework through which I approach my investigation of truth. The following links lead to two pieces written by two distinguished Bahá’í scholars, Dr. Farzam Arbab and Dr. William Hatcher:

The next three links give you a sense of some of my own personal reflections on the topic of science and religion:

But this passage from Abdu’l-Bahà provides the best foundation for my reflections:

Alas! That humanity is completely submerged in imitations and unrealities notwithstanding the truth of divine religion has ever remained the same. Superstitions have obscured the fundamental reality, the world is darkened and the light of religion is not apparent. This darkness is conducive to differences and dissensions; rites and dogmas are many and various; therefore discord has arisen among the religious systems whereas religion is for the unification of mankind. True religion is the source of love and agreement amongst men, the cause of the development of praiseworthy qualities; but the people are holding to the counterfeit and imitation, negligent of the reality which unifies; so they are bereft and deprived of the radiance of religion. They follow superstitions inherited from their fathers and ancestors. To such an extent has this prevailed that they have taken away the heavenly light of divine truth and sit in the darkness of imitations and imaginations. That which was meant to be conducive to life has become the cause of death; that which should have been an evidence of knowledge is now a proof of ignorance; that which was a factor in the sublimity of human nature has proved to be its degradation. Therefore the realm of the religionist has gradually narrowed and darkened and the sphere of the materialist has widened and advanced; for the religionist has held to imitation and counterfeit, neglecting and discarding holiness and the sacred reality of religion. When the sun sets it is the time for bats to fly. They come forth because they are creatures of the night. When the lights of religion become darkened the materialists appear. They are the bats of night. The decline of religion is their time of activity; they seek the shadows when the world is darkened and clouds have spread over it. (Abdu’l-Bahà, Bahá’í World Faith).