In 2013, Cameron described the transformation of Canada’s immigration and refugee policies under the Trudeau government that culminated in the passing of the Immigration Act in 1976 (Cameron, 2013). Some of the changes that characterized this Act included “the principle of admission to Canada on humanitarian grounds and a provision for private sponsorship of refugees.” Cameron goes on to demonstrate, in precise detail, how one particular refugee program served as a unique model of how government and civil society can work together as partners, “blending private sponsorship and government-assisted resettlement.” The program was called the Iranian Baha’i Refugee Program, and it ran from 1981-1989.

Cameron acknowledged the importance of a political dimension to refugee programs in order to hold offending states to account, but argued that:

One of the primary reasons for the success of the Baha’i program was the degree of responsibility given to the Canadian community for the selection and resettlement process. Its institutions and members were highly invested in the program as a result, and the impressive socioeconomic outcomes of the program are a testament to the benefits reaped by the refugees themselves as a result of these ­relationships.

A Case Study of Successful Resettlement

In September of 1983 my family arrived at the gates of the Toronto Airport. The journey itself was a harrowing experience. My parents, both in their early 20s and expecting their first born, had earlier that year fled from religious persecution in their home country. On foot they crossed the border into Pakistan, and from Karachi flew to Sri Lanka, where I was born. After almost a year in Sri Lanka, they finally received word from the Baha’i Community of Canada that they were ready to receive us. From the familiar lands of the east they were now determined to create a new life in the unfamiliar lands of the west. Here is a picture of my family shortly after we arrived. Look how cute I was 🙂

Imagine yourself, a Canadian, leaving the comforts of Toronto, Vancouver, Montreal, Calgary, or Halifax and settling, against your will, in Iran. Sound difficult? It was for my family, and for everyone else. The challenges didn’t stop at Toronto. There were many hurdles awaiting my family shortly after arriving on Canadian soil such as accidentally being sent to Sackville, New Brunswick and having to wait two days before finally finding our way to our new home, Halifax. Regardless, we landed and there was a community ready to absorb the shock.

If it wasn’t for the determination of our Canadian sponsors (and their willingness to face seemingly unsurmountable challenges), our struggle could have been worse. I might be telling a different story of a family caught-up in a bureaucratic back-log, being received at the airport gates by a government liaison, and having to deal with layers of over-worked personnel before finally being settled into a low-income housing neighbourhood. In fact, it was the hospitality of the Canadian Baha’i community that made the journey more of a transition than an abrupt encounter. And this hospitality was possible due to a fledgling government-backed private sponsorship program, which allowed “solidarity groups, religious communities and diaspora organizations to complement the government-assisted refugee program with grassroots humanitarian action” (Cameron, 2013).

Refugees, like my family, didn’t come to this country to make things difficult for Canadians. We came to Canada to live. To live like you want to live. To be permitted to work towards our dreams and hopes. To be free to hold an identity, free from discrimination and violence. To contribute to our communities as responsible citizens.

I’m currently a Master’s student at Carleton University studying Forensic Experimental Psychology. I work for Public Safety, and hope to secure a career within the correctional service as a researcher. Ultimately, I want to make our communities safer by contributing to the successful rehabilitation and reintegration of offenders. My brother is studying interdisciplinary design at NSCAD in Halifax, and hopes to contribute to his community by beautifying and encouraging sustainability in urban spaces. My sister is studying music at Berklee College in Boston, and hopes to draw attention to the importance of preserving folk music from diverse traditions around the world. Here are the three of us with our goofy faces: 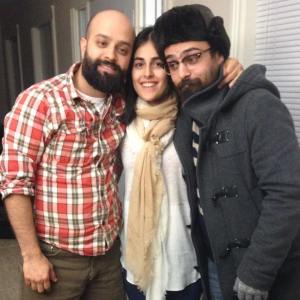 Around two decades ago my father started a business in Bedford, Nova Scotia. It is now one of the most successful of its kind east of Montreal, and has supported hundreds of individuals and families. My father is also an active supporter of Feed Nova Scotia, a charitable organization dedicated to feeding the hungry through food banks across the province. My mom, first and foremost, raised and supported this entire family. For almost three decades she put aside her personal ambitions to be a source of love and understanding for her children as they worked towards their dreams, and strength for her husband as he built an empire from scratch. On top of all that, my mother has been a community leader and a pillar of support for hundreds in HRM. I’m pretty sure she has put in more volunteer hours than the Dalai Lama. Currently, she is working for Immigration Services as an interpreter for Iranian and Afghani families resettling in Halifax. Here’s a picture of my wonderful parents with my two beautiful kids:

Canada took us in and now we’re giving back.

But I’m worried. On the heels of the Syrian Crisis, which has recently become the focus of international attention after an image went viral showing the lifeless body of three-year-old, Aylan Kurdi, washed up on a Turkish beach, Canada is now in the midst of a national debate regarding its intake of Syrian refugees. Changes to immigration policies have resulted in more government involvement, especially with our national preoccupation with security since 9/11. This means that civic groups are less involved in identifying refugees for resettlement as was the case for the Baha’i Refugee Program and a number of other similar programs throughout Canada’s history. Ultimately, this means longer wait times and more failed applications as refugees wade through the bureaucracy of gc.ca.

While altruism is part of the motivation for private sponsors, their action often arises from a feeling of connection with a particular persecuted group—whether because of a common homeland, religious affiliation or a certain kind of persecution. A private sponsorship program that closes the space for groups to identify refugees for resettlement may undermine the basis of its long-term viability…

…By looking back to the origins of private sponsorship we may be able to uncover other lessons that will help to maintain the vitality of this essential resettlement policy. The beneficiaries will not only be the stateless and vulnerable refugees who find new homes in Canada, but also the citizens who choose to act on principles of hospitality, generosity and solidarity with others.