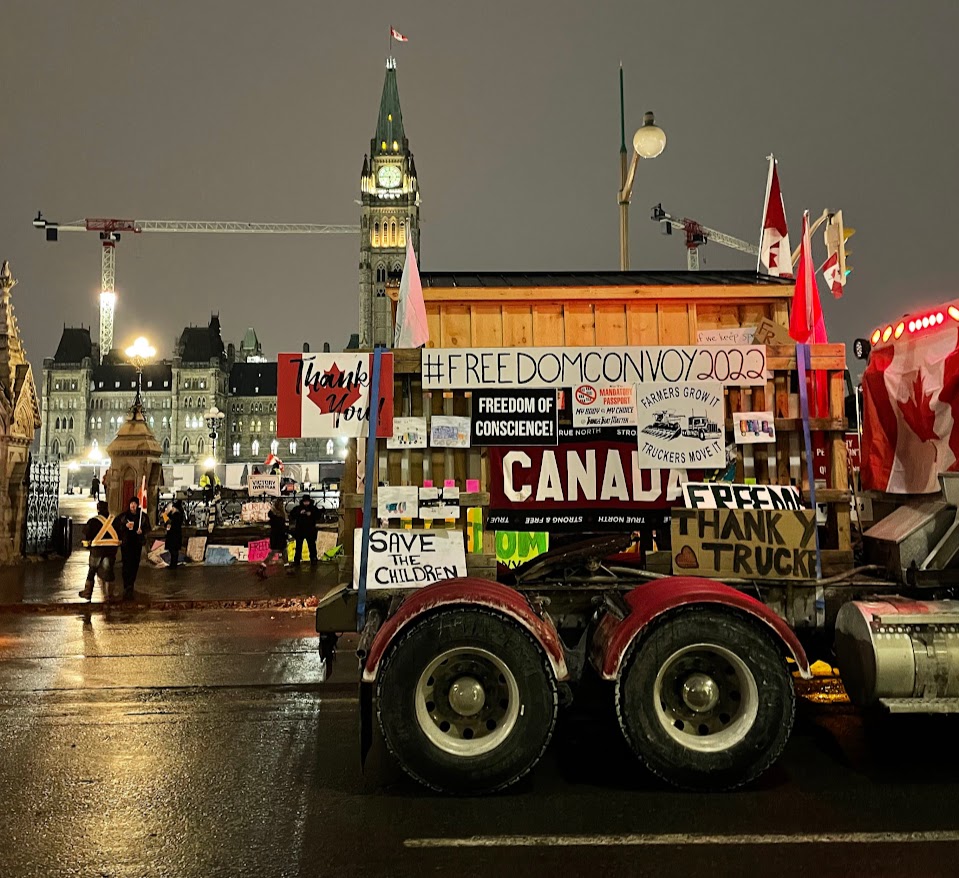 When faced with historical events, a writer carries a heavy responsibility: The duty to capture the spirit of the times, to distill the essence of their experience. So I went to Centretown this evening and now I want to describe how I feel about the Siege of Centretown, in the year of our Lord, 2022.

This isn’t journalism. I’m not attempting rigorous, unbiased analysis. This is my personal reflection and very much a biased point of view. I can’t emphasize this enough.

At this point, anyone who’s taken the time to dig into this situation knows that the “Freedom Convoy” is represented (in part) by the leadership of Canada Unity. If you dug further, then you also know that the demands of this “protest” can be found in the belly of this M.O.U.

I didn’t study it, but from what I understand of the M.O.U., I think that Canada Unity wants to sign an accord with the Governor General and the Senate (non-elected members of government). The latter parties would form the Government of Canada and together with Canada Unity, would appoint representatives and committees, and somehow – I’m a little foggy on the details – but these folks seem ready to take matters into their own hands in partnership with unelected members of government to end all vaccine mandates…or something like that.

I don’t know. This doesn’t just look like an innocuous and impassioned group of “honest, hard working” Canadians, speaking out on the Hill in support of truckers and basic human rights. It also looks like an organized attempt at disrupting government and usurping power. They’ve elected themselves as “our” representatives and have taken to the Hill to make demands on “our” behalf.

I look side-to-side and then point to myself, “I’m sorry, who are you doing this for?” 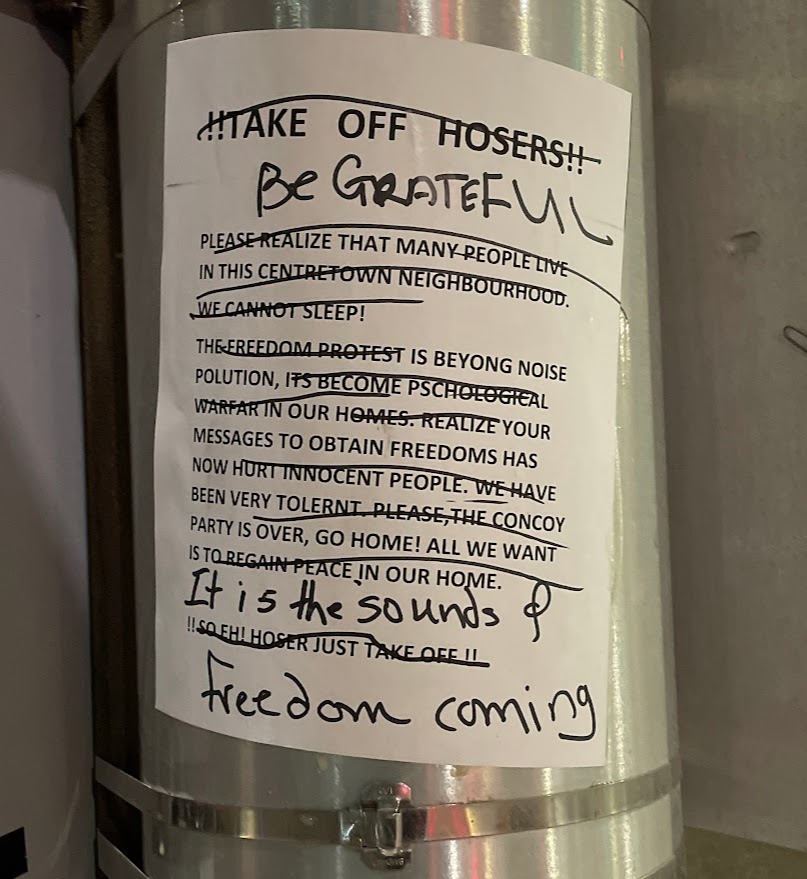 No, they’re serious about this, and they’re not going anywhere until their M.O.U. is signed. Just look at section 3 (j), which states:

I love and respect truckers insofar as they’re humans deserving of love and respect. I believe in the freedom of assembly and expression, insofar as our other rights and freedoms are not infringed as a result. I cherish our democracy and the rich civil discourse we enjoy in Canada, though I recognize that many have been systematically marginalized and left out of the conversation.

I support any attempt at creating a more inclusive society that empowers its members to engage in civic action, but I DO NOT support the mandate of Canada Unity nor the demands set forth in their M.O.U. 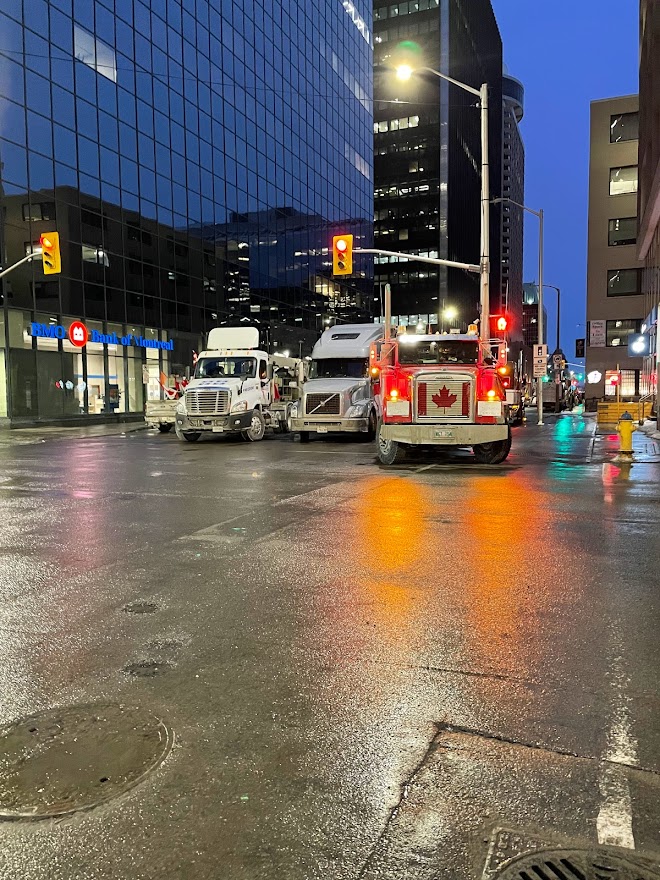 As I walk down Kent Street towards Wellington, I’m terrified. I’m very uncomfortable. I feel completely out of place. I know that many of these folks are probably kind and well-meaning. I wish I could spend more time to sit and talk with them, to get to know their thoughts and aspirations. We probably share a lot in common, but I’m struggling with empathy right now. Please forgive me.

I didn’t vote for these people. They are not participating in our democracy through the (albeit imperfect) process enshrined in our laws. This is an occupation. In medieval times, this could only be described as the mob descending upon the capital to overthrow the King. And this mob, these folks I’m looking at, they remind me of a certain segment of Canada that used to intimidate and abuse me as a kid.

I feel like I know every one of them, but I honestly don’t know any of them. I concede, I’ve been swept up in the divisive zeitgeist of our times.

I sort of get what they’re mad about. The ever-changing confusion of policies and mandates imposed across this country over the course of the pandemic. They’ve chosen Justin Trudeau, the “Dicktater” (saw that clever slogan a few times), as the target of their vitriol. But I wonder if that anger is misplaced.

(The vegetarians and vegans will appreciate the irony of this photo. Tyranny, indeed.) 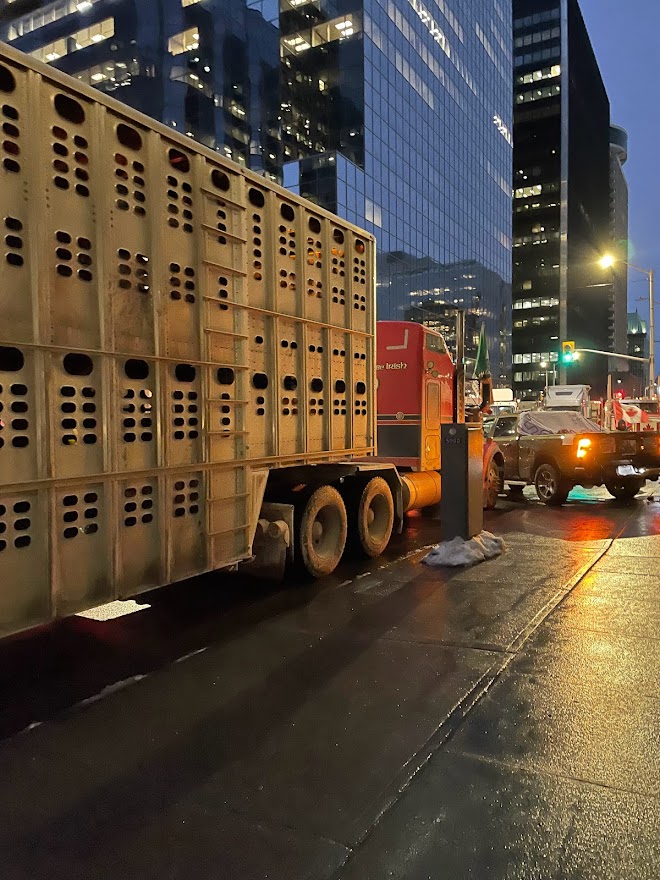 Government policy and law-making in Canada is not an autocratic system. It requires input and consultation with many stakeholders, experts, and concerned citizens alike. The Prime Minister does not rule with unchecked power. The painstaking process of passing laws through parliament and judicial oversight ensure that our democracy is protected. It’s certainly not perfect, but perfection doesn’t exist in civil society. We aspire, make effort, struggle, find common ground, debate and compromise, we dig our heals in and do the hard work of building a better society.

I also concede that our governments could do a whole lot more to hear and represent marginalized voices, from all segments of society. First Nations, Métis, and Inuit. Immigrants. LGBTQ2+. Black Canadians. Persons with disabilities….Albertans?

But this occupation is none of these things. They’ve hijacked the democratic process to assert their own narrow, uninformed, and ill-conceived agendas in the form of a good ol’ fashioned tailgate party. At least they know how to have a good time. 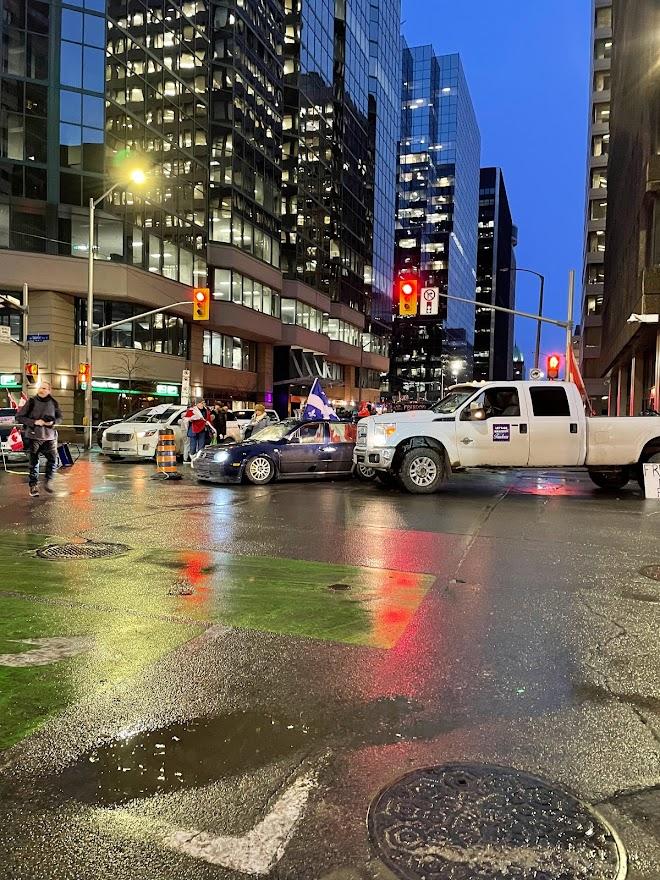 I approached Wellington Street. The blaring of horns grew louder. 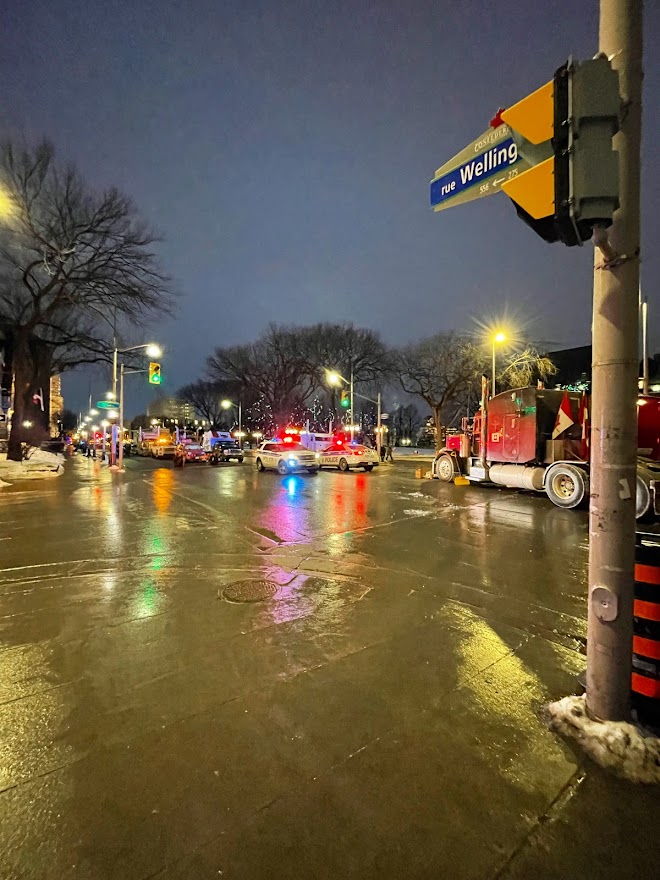 I can’t emphasize enough the enormity of this event. It’s huge, but these trucks are also very huge. It doesn’t take many to clog up the downtown core, and they have enough to do just that. Can’t be sure exactly how many people there are. 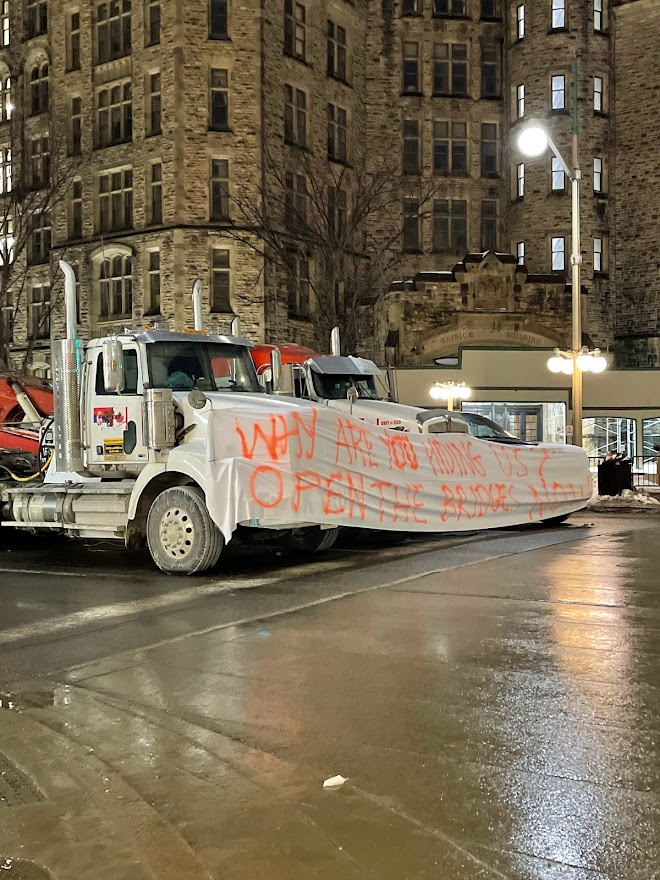 The angry bigot in me wants to shout, “Proud rednecks from God’s country have landed in Ottawa, they’ve dropped anchor, and the bastards are ready for the long haul!” But that would just make matters worse, the division deeper.

The barrier between “us” and “them” is thick enough.

I’ve seen adults and children in pijamas, climbing in and out of semis, overbearing Ford pick-ups, camper vans, and U-Hauls (who’s paying for those?) transformed into temporary apartments. Garbage is piled in bags and bins around their makeshift camps. Actually, it sort of feels like a trailer park or the KOA near Niagara Falls.

The smell of diesel is thick in the air. Many of the vehicles are idling. Someone just threw a glass bottle at the ground nearby, I heard it smash. Someone giggled. I wonder what their official position is on anthropogenic climate change.

Yes, that’s firewood you’re looking at below. There’s lots of firewood around. 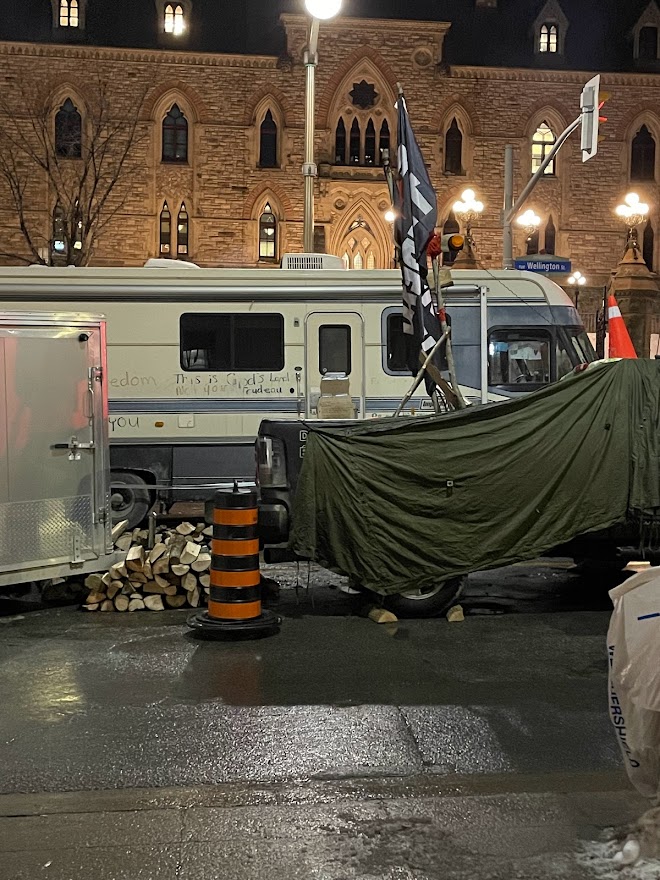 Though I can’t speak to what happened in the early days of the occupation, I didn’t see any explicit emblems of white supremacy, white nationalism, or otherwise racist ideology. There was certainly a religious tone. Lots of Bible quotes.

At the epicenter of the occupation, at the gates of Parliament Hill, a crowd is gathered around a man giving a sermon about Jesus, about the eternity of life and the importance of living free. I paraphrase: 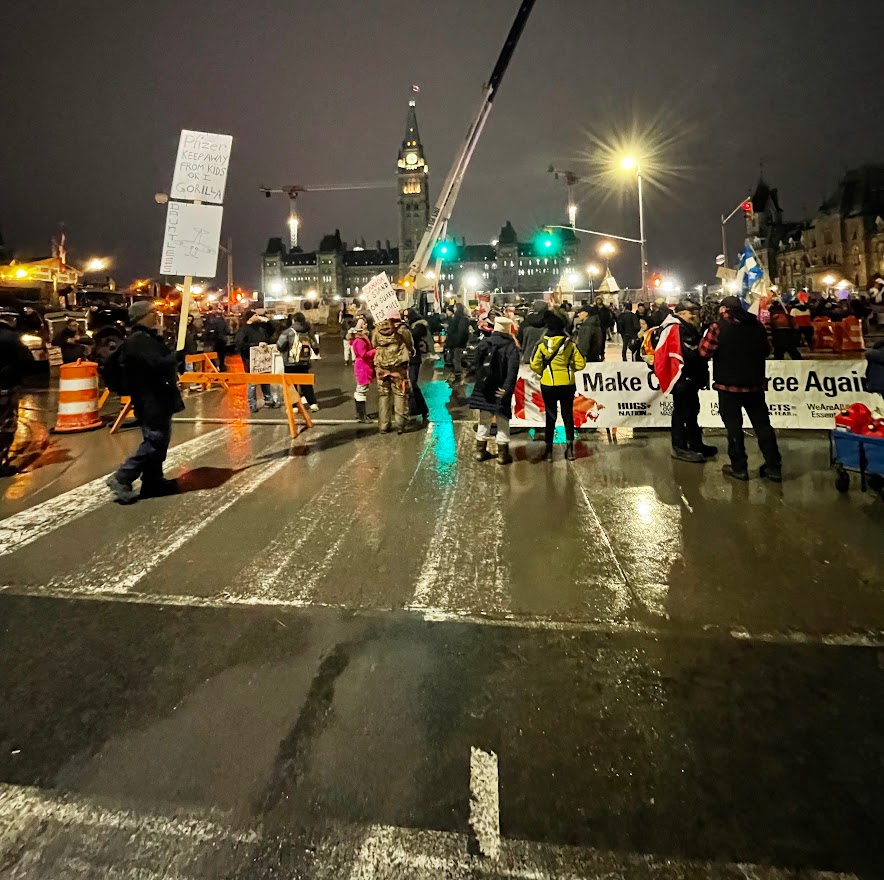 After reading a few of the signs and listening to his sermon, I think I’ve basically figured out the theological logic behind their thinking. Something about the idea that there is wisdom in God’s action including his calamity, so climate change, pandemics — all these things — are just part of the plan and we should trust in Him. Something about freedom as the path to God’s love. Therefore, our purpose is to enjoy our freedom and to seek salvation through Christ….I think.

And here’s the crux of the issue: Tyranny is a hindrance to freedom and, therefore, an obstruction of God’s will. The purpose of government is to protect freedom, no more no less. I think that’s also called libertarianism, and it seems to work really well for people with wealth, power, privilege, and property. 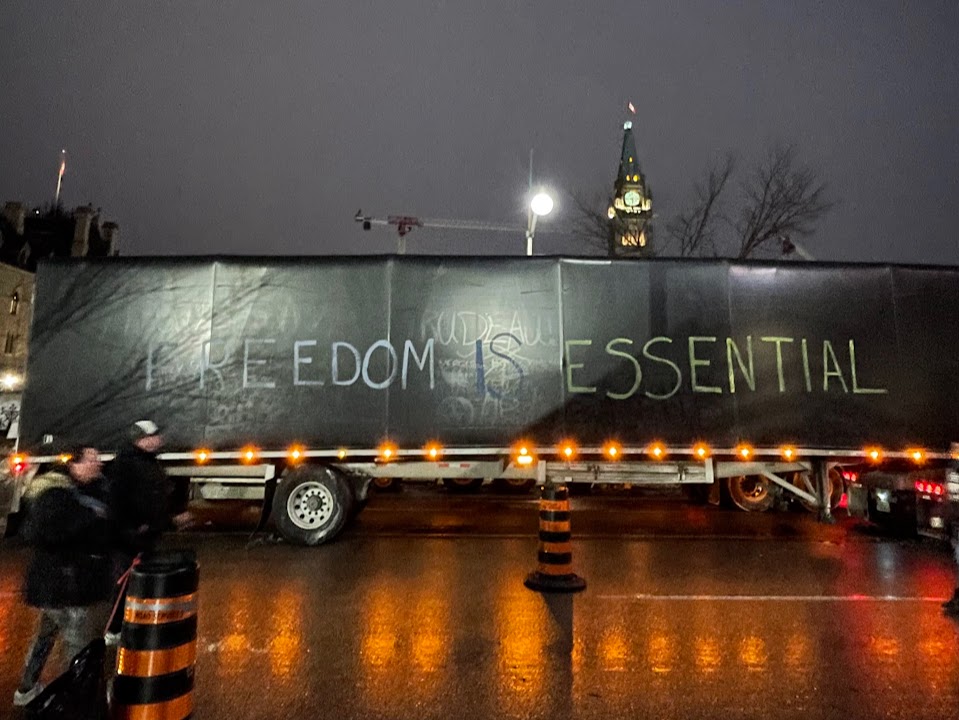 Another dude is live-Instagramming himself nearby, shouting something angry about freedom, rights, and liberty. With the other hand he tugs at his German Shepherd – the chain is taut. Now that I think of it, I saw a lot of German Shepherds. No chihuahua’s though.

Like I said, the men and women here really remind me of the sort of crowd I encountered in my youth, at bush parties on some rural Atlantic farm. Lots of liquor, lots of weed, some bonfires, grunting and cawing, bad dancing, some guy following me around with a bone to pick. Though, I don’t recall anyone giving sermons through a loudspeaker at those parties.

I’ve tried to forgive those people from my past, but there’s still a lot of unresolved hate lurking inside.

I definitely didn’t see any physical violence. Folks mostly ignored me. But what is violence? These trucks are violent. They’re certainly not being used to do their jobs. They’ve been weaponized to “Fuck Trudeau!”, to spread a narrow interpretation of the Good Book, and to end the North Korean tyranny of vaccine mandates. 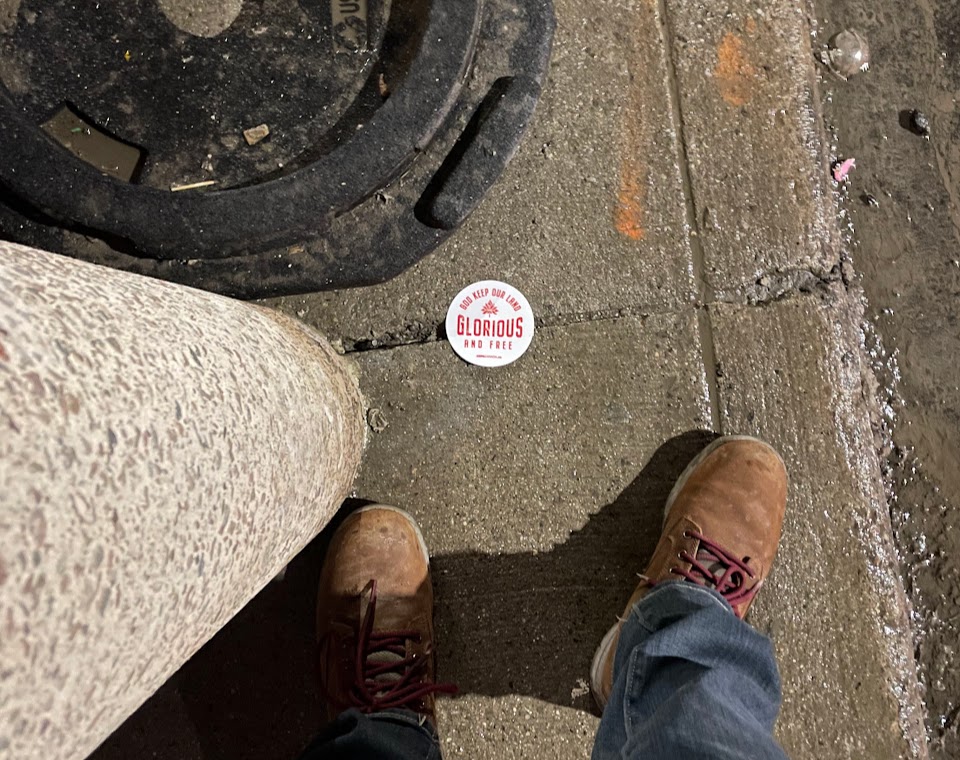 Hardly any mask wearing, but I suppose that’s the whole point. Anyone who was wearing a mask clearly wasn’t there to support, so I was sort of passing through in disguise.

The pastor just said, “Hey listen, our God is an amazing God!” Indeed.

Even if they wanted to leave, I think it would take a few days just to unmoor themselves. Everything looks so permanent, like a home, lived-in, with plans for the future.

Still, as far as I can tell, they’re not planning to leave. As one organizer of the protest , Patrick King, said, they will not be leaving and are planning to stay until all COVID-19 public health measures are eliminated and the Liberal Party is “resigned, gone and abolished.” And there’s even talk of a platoon of tractors joining this weekend. Great. 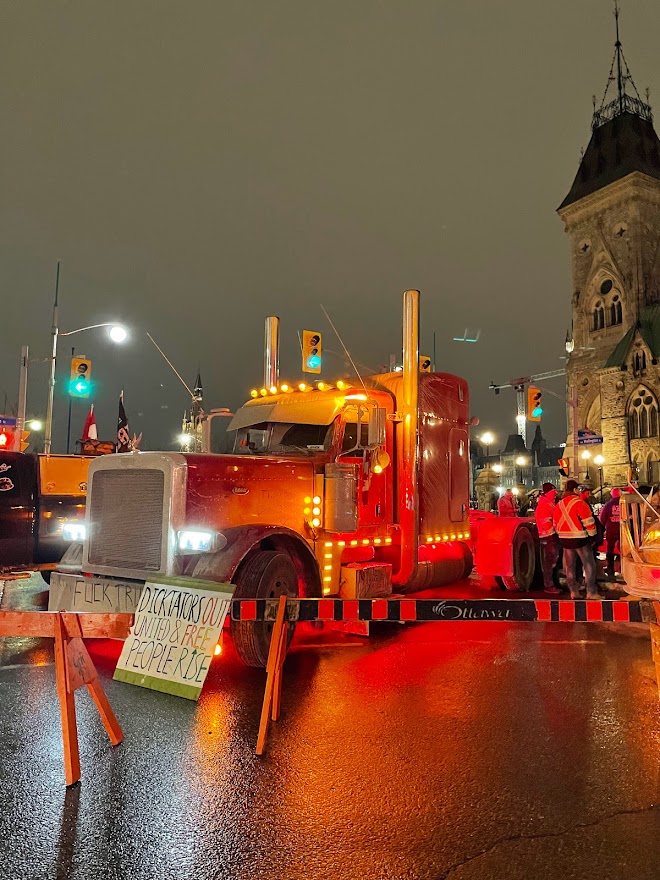 Though the grave of the unknown soldier remains solemn, horns blare like war cries foreshadowing an impending battle on the horizon. 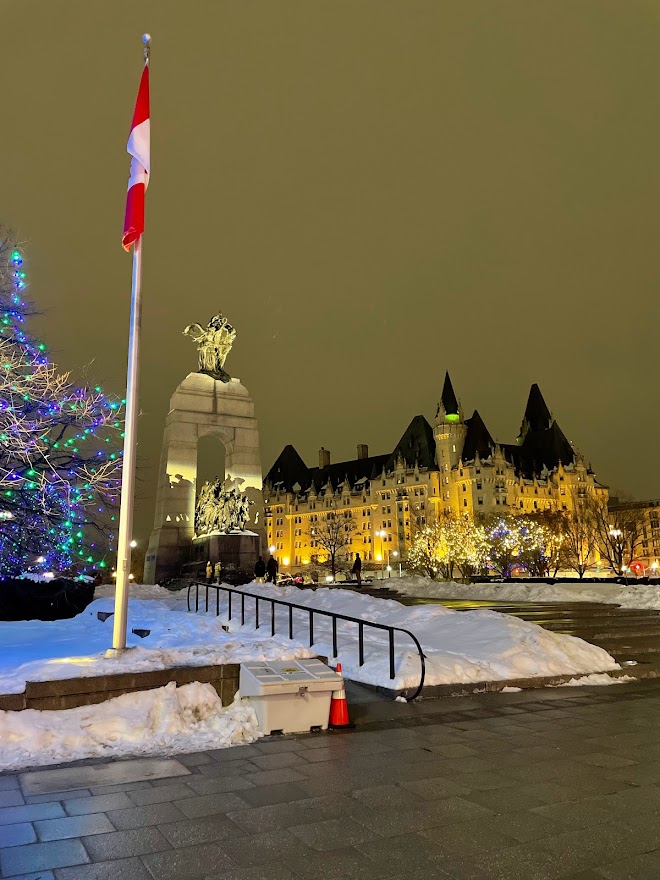 Meanwhile, the NAC displays that proud symbol of inclusivity, which now appears like an artistic juxtaposition against the homogenous crusade taking place behind me, and Black history month has been all but drowned out this week.

Ottawa is under siege. 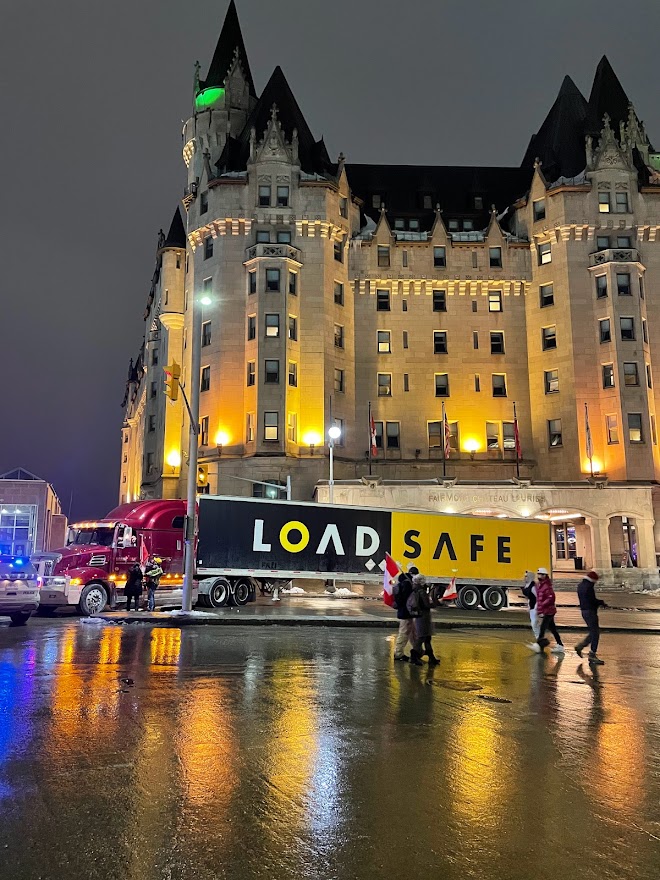 That’s the only way to describe what I’m experiencing.

And then I was slammed with the insanity of Rideau Street. I’ll let the pictures tell the story here.

I decided to leave and head back to my car, but not before stopping by my office building. The place where I used to work before this damn pandemic started. I don’t mind working from home, but somehow I’m consumed with nostalgia wondering when I’ll get to enjoy the fellowship of my colleagues again. When can we go back to complaining about those trivial atrocities, like a late arriving LRT?

For now, our building is closed for business.

So a young couple (obviously participant occupiers) asked me to take photos of them in front of these semi’s with their phone, so I did. Really good photos too – three of them (not shown here). 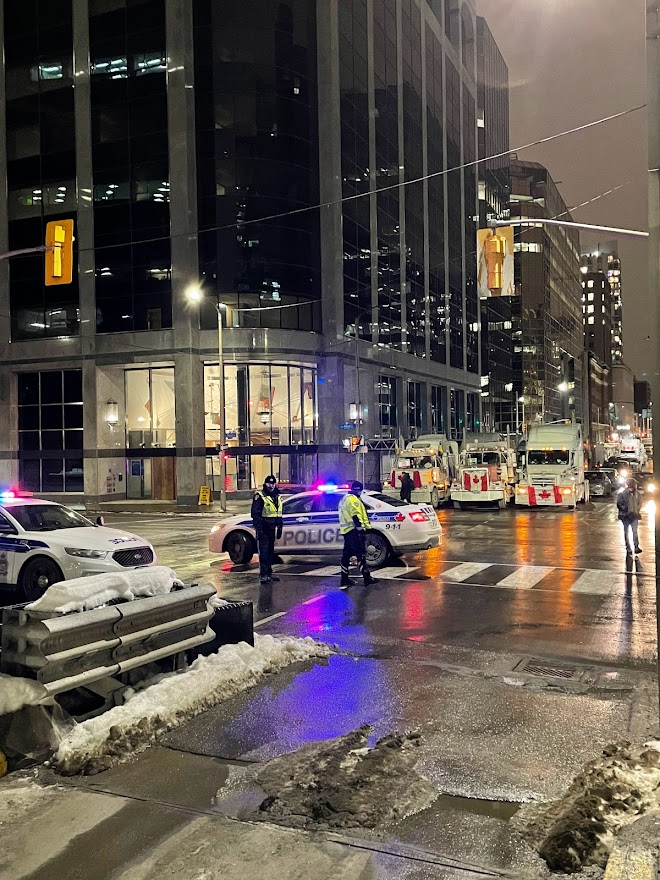 “Check to make sure you like them,” I asked before the guy gave me a fist bump. He was very thankful. I thought about asking them some questions, or bringing up the fact that we just broke a bunch of public health rules,  but I was already feeling anxious to get home.

This is the “honk if you have a tiny penis” guy. The testicles on this one. 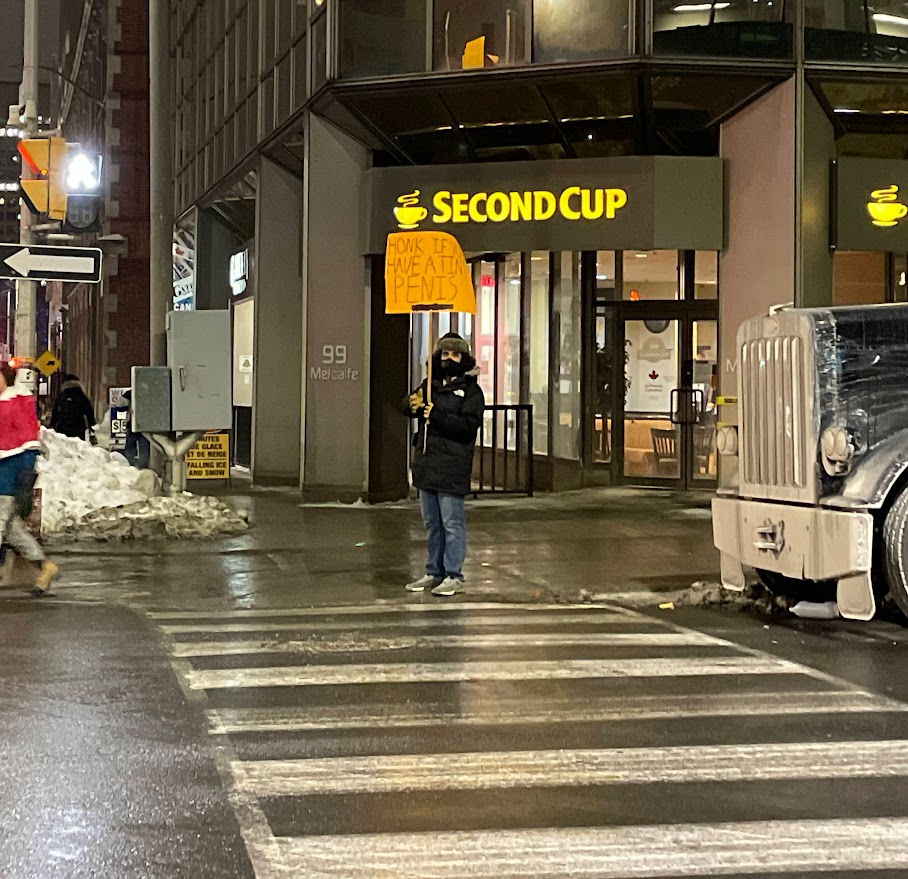 A couple more photos from the occupation, south of Centertown.

I ended my night eating a delicious meal at an Afghani Kabob spot on Bank Street. I ordered my food in Farsi and conversed, in my mother tongue, with the shop owner about how business was going given the circumstances. He was thankful, “My sign is on, we’re open, I’m lucky.”

He was referring to the fact that his restaurant fell just outside of the occupation boundaries. He was indeed lucky. Everything inside the boundary is basically shut down, containing only a dystopian utopia for anarchists.